Welcome to the home of Data Realms' first independently developed game, Cortex Command! It features real-time tactical battles, and also a strategic, turn-based metagame on top, with support for up to four players in split-screen. It won two awards in the Independent Games Festival 2009.

Dynamic 2D pixel graphics coupled with an extremely detailed physics engine makes for replayable and emergent gameplay. Scroll down for more information about the concept, story, and features of this labor of love!

Gameplay video - use the fullscreen button!

Commanding with your Cortex

In the world of Cortex Command, many humans have opted to amputate their entire natural bodies in order to prolong their lives and enable interstellar space travel. Their disembodied brains are hardly helpless, however, as they can remotely control all kinds of machines and craft through artificial interfaces.

Playing as one of these people's brains, you can quickly switch control between many different expendable bodies in order to complete otherwise dangerous tasks - all from the physical safety of your command bunker. Use these technological powers of telepathy to collect gold out of the fully destructible terrain, then purchase even more bodies and materiel with those newly acquired funds!

You can even program the crude A.I.s of your puppet army to complete simple tasks (patrolling, digging, etc.) while your attention and direct control is somewhere else. Use your accumulated forces to protect your brain, explore the world, and defeat your competition!

Cortex Command is set a few hundred years into the future, where the now cybernetic human race is able to travel between stars and has already met several alien civilizations.

Interstellar trade and prosperity reigns, but there is always an ever-expanding frontier to explore and exploit for precious resources. In this gold rush of galactic proportions, fantastic adventure and brutal competition awaits.

You play as the boss of a small gold mining company that has just arrived at a newly discovered Earth-like planet. The large space ship that brought you here along with many other adventurers is called a TradeStar. It acts as a massive orbital safe haven and marketplace for the fortune seekers who venture down onto the planet's surface. Your purchases of bodies, guns, and equipment are sent from the TradeStar orbiting above and delivered to you by your choice of landing craft.

However, it soon becomes clear that the planet isn't as pristine as initially thought, and you will have to quickly adapt from your humble beginnings in order to survive and ultimately discover the dangerous secrets of this alien world..

Fully destructible environments - The gold you need to excavate is sprinkled throughout the terrain of each scene. Use special digging tools to blast your way into the dirt and debris. All the pieces of bodies and ships from your struggles will fall to the ground and permanently add to the battlefield. Get more powerful (and expensive) diggers and you can even tunnel into your enemies' bunkers from below! 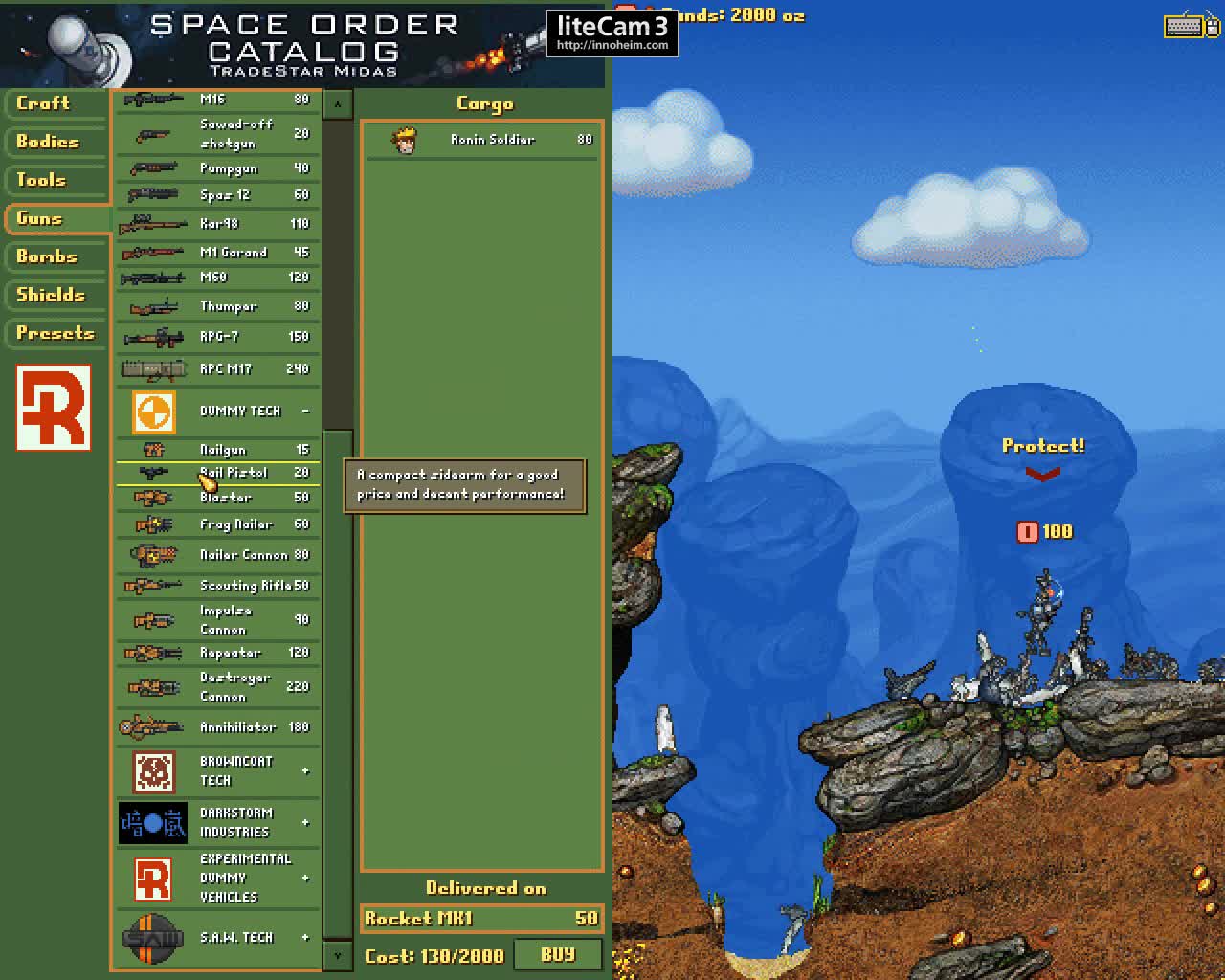 In-game buying menu - At any time and place during the game, bring up a powerful menu to order new bodies and equipment, all delivered at the location and by the transport ship of your choosing. Rockets are cheaper but unreliable and harder to land. Drop ships are far more expensive but can quickly deploy entire groups of puppets onto difficult terrain. Ships and equipment returned to the TradeStar are refunded to your account.

Build your own bunker - At the start of most missions, you are able to take your time and build your own command bunker from scratch. Easily design twisting tunnels and place doors, traps, and turrets to thwart your enemies' intrusions! Pre-deploy and equip bodies in and around your installation to prepare yourself for your objectives. Don't spend too much though, or you won't have enough funds left when the mission starts! 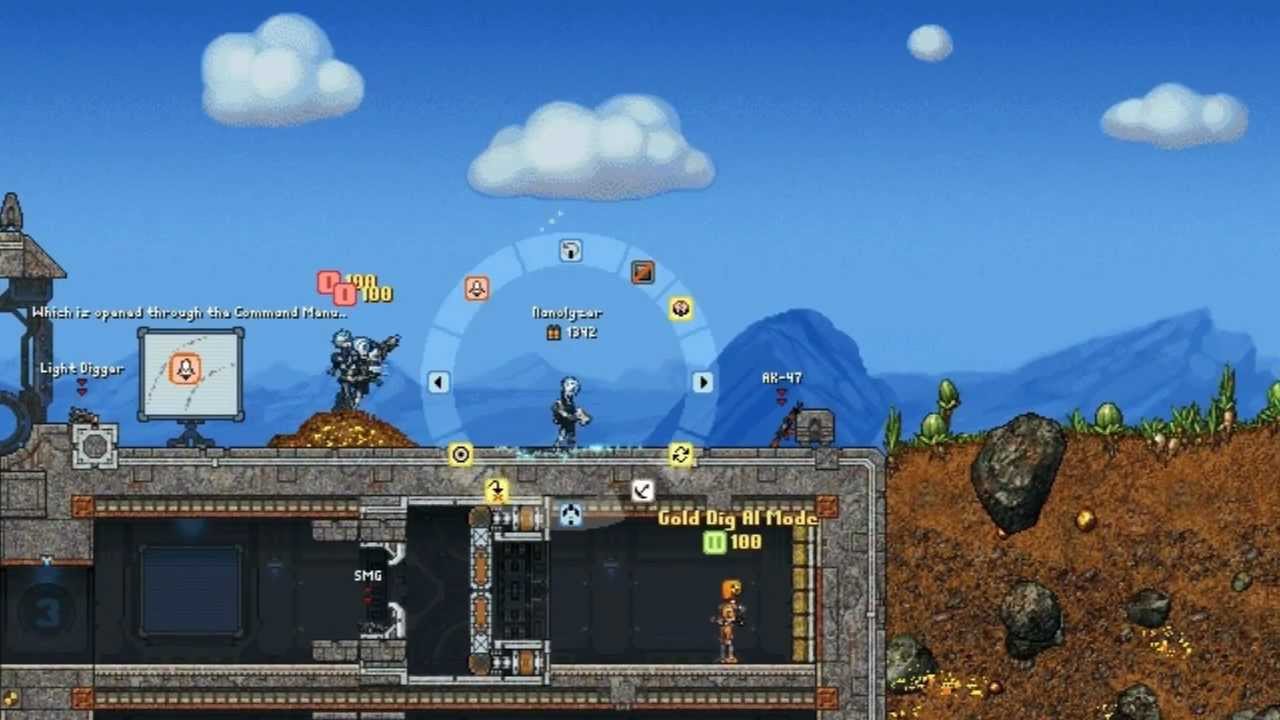 Four-player cooperative and/or versus multiplayer - Gather your friends and plug in those game controllers! Play skirmish or campaign missions with or against up to three of your buddies. 2 vs 2, 1 vs. 3, 4 vs. the CPU - it's up to you! (rhyme intended). Flexible control settings allow you to use the keyboard, keyboard + mouse, or any generic game controller you can find and plug in.

Built-in editors and modding - Several in-game editors allow you to easily create your own stuff. The game's engine is built to make it very simple to modify and add your own content. Design your own missions, guys, ships, weapons, tools, bombs, and shields - and easily share them with your friends. Join and download some fantastic mods from the community at the Data Realms Fan Forums.

The game isn't done yet - but you can still play it today!

Please note that Cortex Command is currently a work in progress and NOT a finished product! The campaign mode and missions are present, but as an unpolished ALPHA state in the version available right now. However, you may still buy alicense today, which will give you access to any and all future versions up to and including the final with the full polished campaign mode in it.

Thank you for your understanding and support!