Imperial Guard is introduced as a new faction, and all races including the races from the original game and the first expansion (the Eldar, the Space Marines, Chaos, the Orks and the Tyranids) are playable in single-player.[2]

Dawn of War II: Retribution offers a campaign for every race, including the Imperial Guard. The campaign takes place across Sub-sector Aurelia, which appeared in the previous two games. The worlds include the jungle world Typhon Primaris, the desert world Calderis, and the hive world Meridian from Dawn of War II; the arctic world Aurelia and the derelict ship Judgment of Carrion from Chaos Rising; and the dead world of Cyrene, mentioned in the original Dawn of War as having been subjected to Exterminatus (complete sterilization of all life on a planet corrupted by Chaos or alien influences) by Blood Ravens Captain Gabriel Angelos.

Dawn of War II: Retribution takes place ten years after events of Chaos Rising. Sub-sector Aurelia is now suffering from conflict between Ork pirates called the Freebootaz led by Kaptin Bluddflagg to pillage the sub-sector,[3] the arrival of the Eldar of the Craftworld Alaitoc led by Autarch Kayleth to seek about a prophecy and recovering an ancient artifact,[4] a Tyranid Hive Lord restoring the remnants of the Hive Fleet Leviathan and to the link of the Hive Mind,[5] the Blood Ravens defending the sub-sector led by Captain Apollo Diomedes to hunt down Chaos as well as investigating their Chapter Master, Azariah Kyras, for being corrupted by Chaos,[6] the return of Chaos Space Marines of the Black Legion led by Eliphas the Inheritor to fulfill his promise to Abaddon the Despoiler to annihilate the Blood Ravens,[7] and the newly arriving Imperial Guard of the 8th Cadian Regiment led by Lord General Castor, performing an Exterminatus under Inquisitor Adrastia to investigate for corruption within Sub-sector Aurelia as well as the Blood Ravens' Chapter Master Azariah Kyras. These events may have been caused by Gabriel Angelos' actions (from the original Dawn of War game) when he destroyed the Maledictum, a Chaos stone containing the bound essence of a daemon of Khorne, with the hammer 'God-Splitter'.[8]

The Imperial Lord General will be added to the current selection of The Last Stand heroes as well as new environment and new waves of enemies. It can also update all the previous heroes from Dawn of War II and Chaos Rising by importing the Games for Windows account to the Steam Account.

Multiplayer will introduce base building to a small degree, as well as every race getting a Global Ability Advance Unit. Retribution is a stand-alone title and does not require ownership of earlier games in the series to use any of the factions in multiplayer.[10]

The player's character arrives on Typhon Primaris engaging and battling an opposing faction and defeating their leader. (Space Marines vs. Chaos, Eldar vs. Orks, and Imperial Guard vs. Tyranids). It is learned that the Imperial Inquisition has deemed the sector beyond redemption, and will be arriving soon to perform Exterminatus on all the inhabitable worlds in the area. Later, the faction leader is given the objective to eliminate Azariah Kyras who intends to use the impending Exterminatus as a sacrifice to Khorne and ascend to daemonhood. The motivation varies depending on the player's faction, for example the Space Marines, Imperial Guard and Eldar wish to oppose Chaos, their ancient evil enemy; the warlike Orks simply want a good fight and to thump the strongest foes they can find; the Tyranid splinter wishes to overrun the sector and summon a new hive fleet to consume all the biomass; the Chaos faction are Kyras' rivals and wish to surpass him. Regardless, it is deemed by the player faction that Kyras must die. The player quickly attempts to secure a means of transport off Typhon, escaping a local cult along the way.

Arriving on Calderis, the player character fights against Kyras' Chaos-corrupted Blood Ravens Space Marines, operating under orders to purge the planet. After destroying a Warp portal on Aurelia, the faction learns of an attack on Meridian ordered by Kyras and arrives there killing the traitor guardsmen and uncovering a transmission from Kyras revealing his location on Typhon.

The player character returns to Typhon Primaris to confront Kyras himself, only to be ambushed by Eldar from Craftworld Biel-Tan. Wary of a ritual they are undergoing, the player's character kills the Eldar there. Following this, Kyras reveals that the Eldar ritual was preventing the Imperial Inquisition fleet from arriving at the sub-sector. The Inquisition fleet arrives, beginning Exterminatus on Typhon Primaris. The player escapes Typhon before the Exterminatus finishes. A cyclonic torpedo reduces Typhon to ash.

Webroot login. Finding themselves on the space hulk (a huge conglomeration of drifting space-borne detritus consisting of many wrecked ships) known as the Judgment of Carrion, the player's characters recover, and find their determination to stop Kyras. It is deduced that he is hiding on Cyrene, as the planet has already undergone Exterminatus decades ago, and therefore the Inquisition will not travel there to perform Exterminatus again. On Cyrene, the player characters launch an attack against a joint alliance of Chaos Space Marines, corrupt Imperial Guardsmen and traitor Blood Ravens by using their most powerful unit against them. Kyras begins to ascend into daemonhood. Gabriel and his 3rd Company launch an attack on Kyras' forces while Gabriel's own command unit confronts the daemon prince himself; however they are defeated by Kyras. The player's faction then launches their own attack, ultimately successfully killing Kyras.

After Kyras' death, the ending of the game will depend on which race the players character chose: 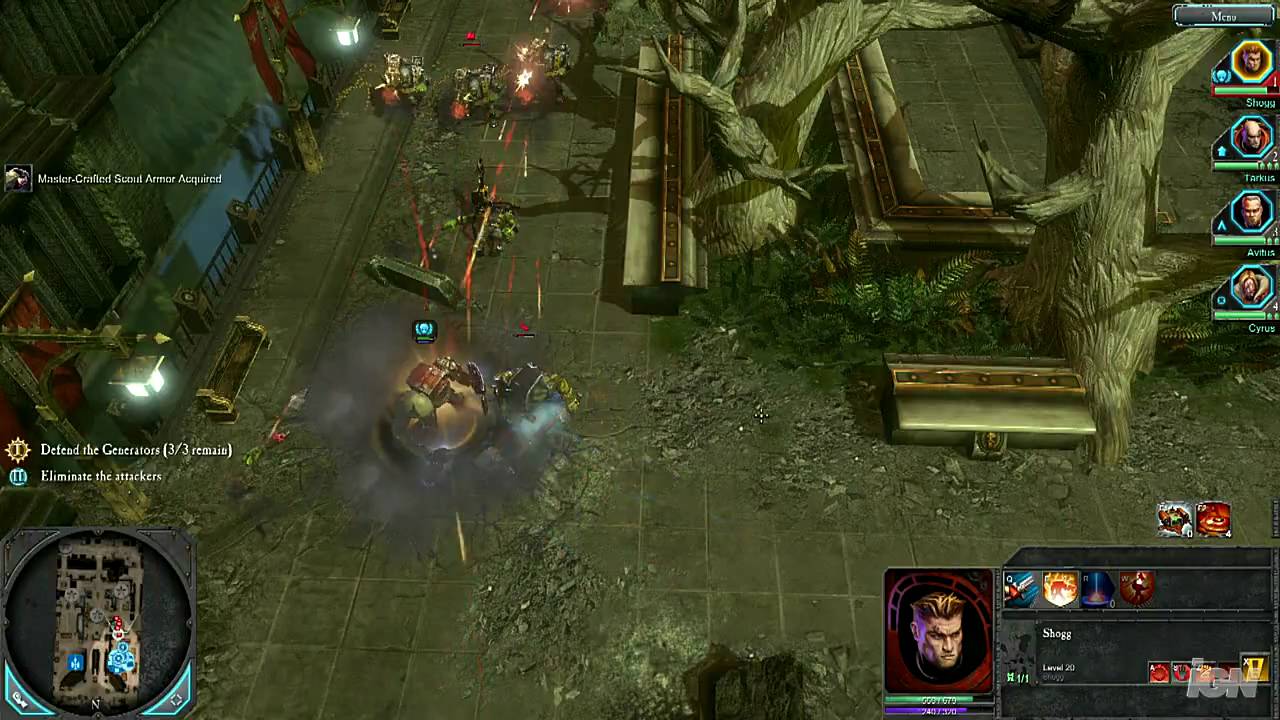 On September 15, 2010 Relic Entertainment announced that Retribution would be dropping the Games for Windows – Live multiplayer platform in favor of using Steamworks as its primary and only platform.,[11] and the new multiplayer platform does not communicate with the old Live platform. This makes the game entirely stand-alone with all the races included (unlike Chaos Rising, which required the original Dawn of War II to use the original four races in multiplayer). Plot-wise, two playable characters (Cyrus and Tarkus) have been carried over from the original campaigns. A new multiplayer matchmaking service was developed for Retribution. The addition of Steamworks also allows inviting Steam friends directly to multiplayer matches as well as free-to-play multiplayer weekends and a much faster patching process. 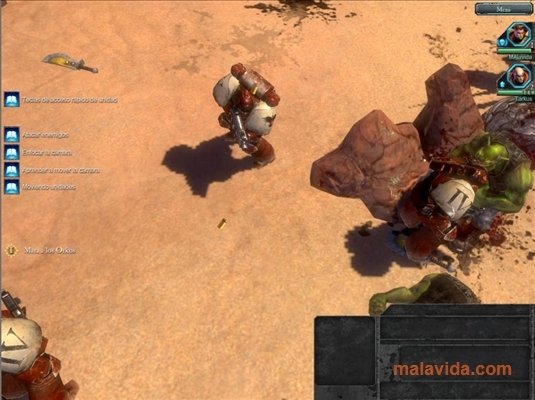 There were speculations that the new playable race would be Imperial Guard and/or the Inquisition, due to the Inquisition's triple-lined 'I' used in the word 'Retribution' in the game trailer;[12] in addition, the expansion's wishlist icon in the Steam system features a female Witch Hunter Inquisitor. On December 21, 2010, the German PC gaming magazine Gamestar revealed the new race would be the Imperial Guard.

A multiplayer beta of the game was launched on Steam on February 1, 2011 and ended on February 25.

Specific race packs were released for each of the six races within the campaign, containing special items for that race in the campaign of Retribution, such as armour, weapons and accessories. The Ork race pack is a Steam exclusive[2] and Tyranid pack a THQ online store exclusive,[13] although all were made available as DLC after release, and all come in the Dawn of War II: Retribution Collector's Edition retail box.[14]

The Tau Crisis Suit Commander is another hero for Last Stand mode available by download.

The game received generally positive reviews upon release. It received an aggregated score of 81.65% on GameRankings based on 36 reviews and 82/100 on Metacritic based on 52 reviews.[20][21]

A few months after Retribution's release, Relic revealed that work had begun on a sequel.[22]

Shortly before THQ's filing for bankruptcy in December 2012, Sega secured a licensing deal agreement with Games Workshop.[23] Sega then purchased Relic Entertainment from THQ in January 2013.[24] This made a future of the sequel uncertain and, in May 2014, Relic would not comment on its status.[25]

The original Dawn of War is an excellent real time base-building strategy game and at first I was disappointed that the sequel didn't follow the same mold. However playing it for a LONG time now I can say it tries something different and most suceeds. It's a squad-based checkpoint taking boss-fighting action game now (sort of a stripped-down version of Company of Heroes with space marines) and it does this with flair. The graphics and voices and music are all perfect for the grim-dark future the game is set in and there is a lot of attention paid to keeping variety in the enemies, weapons, characters and scenarios.
It's not an easy game but if you like the universe or games in which you control a small specialized team in real time this is great.
Only real issues dragging it down for me is the real time makes manuvering somewhat difficult, re-doing missions for bonuses can get a little repetative, and some bosses are cheap. However all told I'm still playing and enjoing it! Not quite at home in the series but still a fun time.